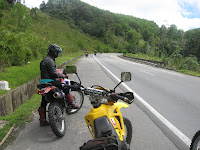 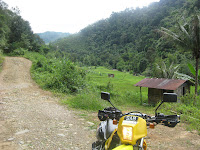 A one day ride that turn to a 2 days agony in the jungle. What suppose to be a fun dirt road that fitures hill side padi field, Village houses with bambo walls and thatch roofs and children running and being curiouse of the riders with full face and colourfull outfit with noisy machine turn to one adventure not soon to be forget. 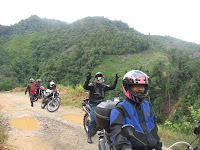 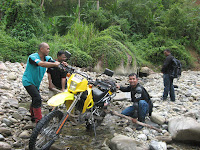 Borneo is a dents jungles with unforgiving terrain much of our ride we have to depand on small trails or logging roads. some parts are trekking trails but becouse of the density of the forest it is imposible to ride trhough without snaging a thorny vine on your face or body. another problem with trying to ride in a denst forest is the terrain fitures with 150metres drop off's at some point. This can be a scary experiance and pushing the bike acrros is sometimes the best thing to do rather than riding in on a diddle size trail. On our ride parts of this is what we wanted to avoid but at some streatches we just had to ride it out.
By noon we where at a river bank..one of the guys went to check how deep the river was and this couse a problem after we found out that it is west deep with rock boulders the size of a 100kg back pack. This will be a problem to cross without taking a plunge in the river with the bikes. we diceded to carry the bikes acrros the river..it took us 2hours to carry and cross the river with 6 bikes. after going through this aginizing experiance we thout there is a few more KM to go up hill. The dirt road looks good from a distance and this will be a peace of cake we thought. 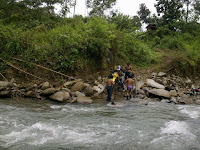 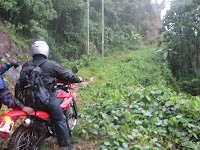 all pump up and raving like we where on a racing competition we ascended the "what looks like a good dirt road" than it happend..this was no ordinary dirt road...it was what we call a river of stones the size of fists. they where loos and slippery as the rain started to get heavy all we could do was push the bikes up and up and up...falling off was a common site. once we reach the top a sigh of releave from every ones face. we continue the ride up and after a tremandouse amout of our anergy of traversing the uneven and slipery trail we find ourselves riding on a small stream of water which was a trail and with rocks. on our left is a 150mtr drop of to a revine.
as we thumperd along bobbing on the trail of roacks spinning wheels with flying debries and rocks was flying all over at the rear...the gusy was shouting out to slow down to much debries flyinf all over and hiting them. than another obstecle..a land slide...aaaaahhhhhhh,...in my mind..naked and beaten up by the ride we set down and thought it trhough. In 2 hours it will be dark and we will not be able to see a thing in the dark. we decided to turn back through all the hell we went through. as we aproach the river it was totaly flooded..ah,,,,...the guysshouted.
Option one- cross the river and may be be lucky not to be swept away..the bike is definitly a problem to carry acros. 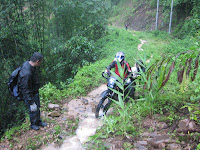 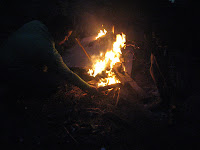 Option two- waite out the river to go down....
we decided to waite out the river..2 hours atleast it will be low enough to cross. seing that hunger was already started to crapt in,..the guys went in to the bush to see what they can fine. when they got back they where carying what look like muddy and dirty roots..one of them shouted." UBI KAYU" tapiyoca. we smiled atleast we will have roots for dinner tnight.
12hours later under the heavy rain, soacking wet and cold we where still on the other side of the river waiting for the water level to go down. at 5 in the morning it was safe to cross the river and so we did carrying the bikes acros.
Once we reach the main road 1st we did was look for a local shope for food,.we had 2 pax of noddles each person.
What the guys say..."it was one hell of adventure,..got to do it again"
Posted by Ride Borneo at 10:19 PM

one hell of riding. Got to do it again the same track and cross the landslide, but DONT FORGET TO TAKE FOOD ALONG, haha, stubborn species

Just getting into adventure riding and your tips are a great help. please suggest best motorcycle tours in Rajasthan .thank you 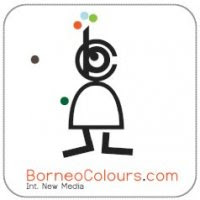